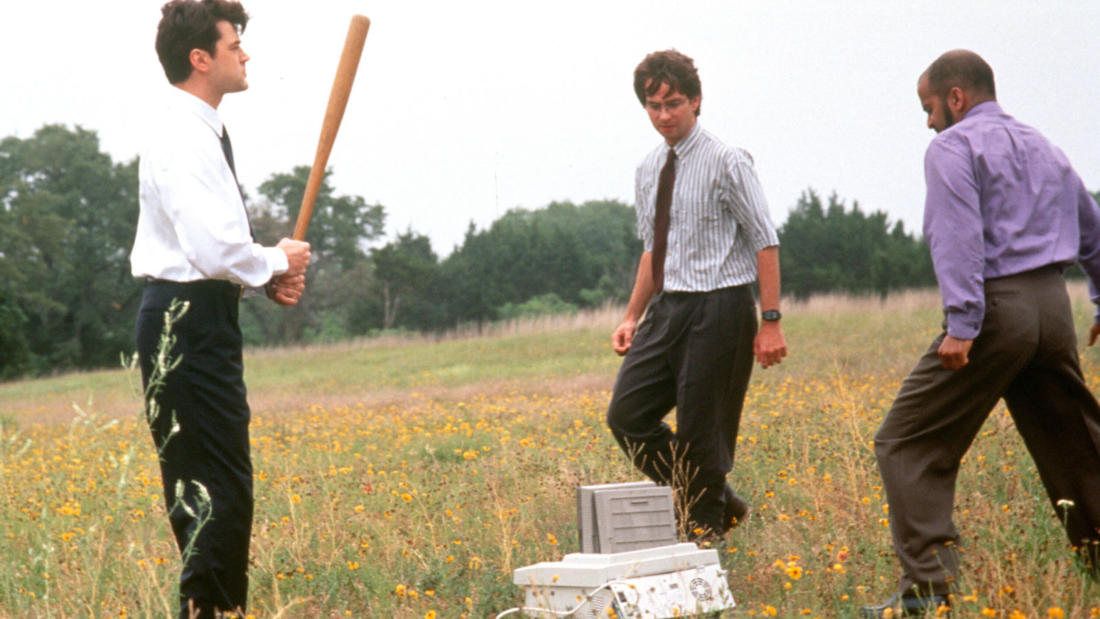 A discussion about the technologies that claim to help us make the most of our time--and their true impact on our lives.

Fed up by TPS reports and printer jams, three office drones rebel against their company and their soul-deadening, cubicle-bound existences.

Corporate drone Peter Gibbons (Ron Livingston) hates his soul-killing job at software company Initech. While undergoing hypnotherapy, Peter is left in a blissful state when his therapist dies in the middle of their session. He refuses to work overtime, plays games at his desk and unintentionally charms two consultants into putting him on the management fast-track. When Peter's friends learn they're about to be downsized, they hatch a revenge plot against the company inspired by "Superman III."

A master of depicting stupidity in the name of genius, writer/director Mike Judge (Beavis and Butthead, Silicon Valley) perfectly understands the use of satire to critique our culture, politics, and technology. Boasting unforgettable performances from Ron Livingston, Jennifer Aniston, and Gary Cole, Office Space is a smart, acerbic takedown of corporate culture about a group of underappreciated, overworked drones and their clash with management, printers, and flair.

Wade Roush is the producer and host of Soonish, an independent podcast about the future: how we think about it, what we can do to shape it, and why our best forecasts—and our worst fears—are usually wrong. From 2014 to 2016 Wade was acting director of MIT’s Knight Science Journalism fellowship program and lead developer of a proposed science communication initiative for MIT’s School of Humanities, Arts, and Social Sciences. From 2007 to 2014, he was chief correspondent, Boston editor, San Francisco editor, columnist, and editor-at-large at Xconomy, an online news network covering high-tech innovation. From 2001 to 2006 he was senior editor and San Francisco bureau chief at MIT Technology Review. In earlier posts he served as the Boston bureau reporter for Science, managing editor of supercomputing publications at NASA Ames Research Center, and Web editor at ebook technology startup NuvoMedia. He has a B.A. in history and science from Harvard College (1989) and a PhD in the history and social study of science and technology from MIT (1994). He publishes at www.soonishpodcast.org, blogs at www.waderoush.com, and tweets from @soonishpodcast and @wroush.