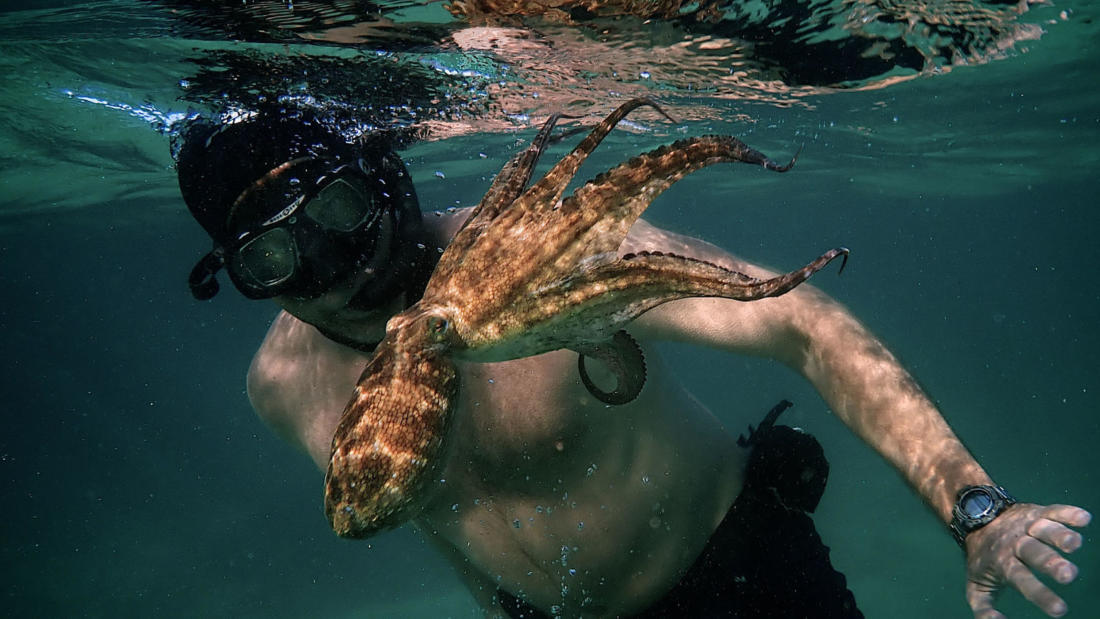 My Octopus Teacher— The healing power of the ocean

Pharmaceutical researcher Kevin Tidgewell studies the medicinal properties of single-celled marine creatures that he collects on dives into tropical oceans. In this presentation, Tidgewell explains how compounds in these cyanobacteria could form the basis of new treatments for pain, cancer, and more—and recounts how he overcame his fear of water after nearly drowning as a child to pursue his research.

A filmmaker forges an unusual friendship with an octopus living in a South African kelp forest.

Craig Foster, suffering from a loss of purpose, begins a daily diving regimen in the freezing kelp forests at the tip of Africa in order to re-energize himself. What he discovers below the water’s surface is a totally alien motivation in the form of an unusually curious octopus. This beautiful record of an animal’s entire life—something seldom achieved in the wild, let alone underwater—was shot over a full year and explores the habits and personality of a strange, undulating creature that most of us have only ever eaten.

Beyond intelligent, dextrous and resilient, the cephalopod shares her secret world with Foster as they develop a touching bond. The underwater encounters are literally breathtaking as Foster holds his breath while interacting with the octopus. An immersive portrait of human–animal understanding, brimming with danger, drama and devastating emotion, My Octopus Teacher grabs you with all eight arms and changes its camouflage—showing you colours and textures you’ve never seen before. [Angie Driscoll, Hot Docs Film Fest]

Dr. Kevin Tidgewell works in the field of medicinal and natural products, specializing in the study of marine cyanobacteria, one-celled organisms that gather in colonies and look like limp seaweed when scooped up. But these simple organisms could hold the keys to pharmaceutical compounds helpful to treat complex central nervous system disorders, cancers and parasitic infections, even addiction and pain.

Tidgewell works with scientific collaborators in Puerto Rico, Curacao, Panama and Cameroon,and worked as a post-doctoral research fellow at both the Scripps Institution of Oceanography in San Diego and the Smithsonian Tropical Research Institute in Panama.

Islands and marine life are cornerstones of his work now, but diving into this work was no easy decision. When he was 3, he nearly drowned in his family’s hot tub and grew into the rare Southern California kid who avoided the water. So when he announced to his family that he was looking at graduate school and studies of marine life and chemistry, his stunned family blurted “Kevin, you know that means you’ll have to learn to swim.”

Not only did he overcome his fear of swimming and water, he’s certified as an AAUS scientific diver along with a number of specialty diver NAUI certifications.