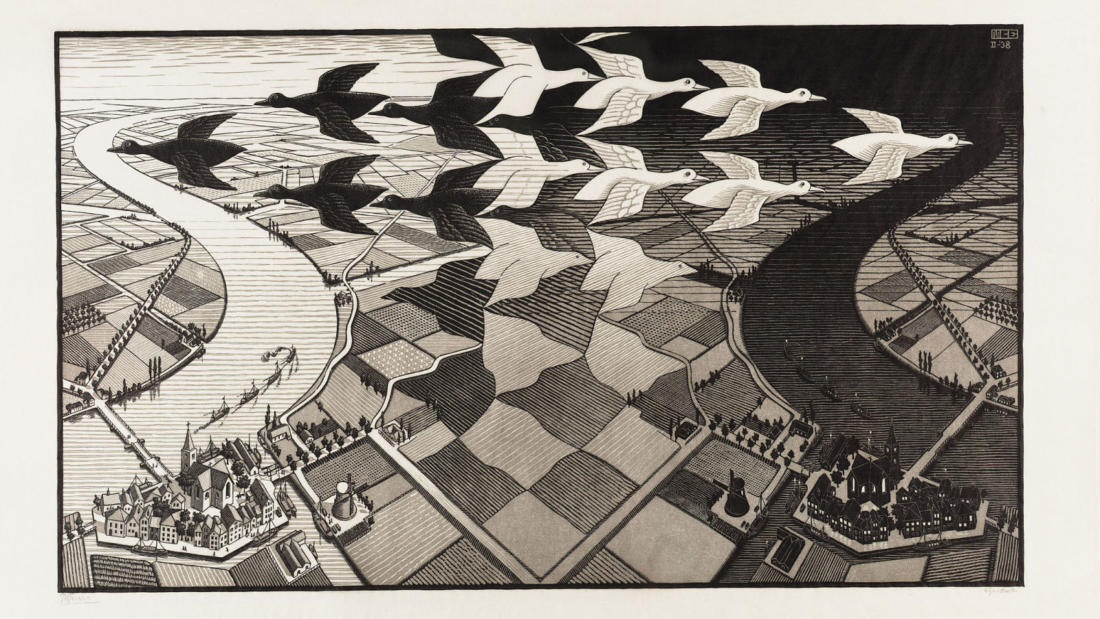 M.C. Escher: Journey to Infinity— [ONLINE] The intersection of art and math

In this recorded online panel discussion artists Chris Klapper and Patrick Gallagher, mathematician Timothy Goldberg, and musician Rachael Elliott discuss M.C. Escher and how his work has influenced each panelist’s professional practice. Re-presented as part of the 2021 National Evening of Science on Screen.

Chris Klapper and Patrick Gallagher collaborate in multidimensional and large-scale multimedia to explore new technologies and use them to express immense ideas on a human scale.

They are currently the 2020-2021 Artists in Residence at FERMILAB – National Particle Physics and Accelerator Laboratory and 2021 UMass Amherst Visiting Artists. Recent projects include PI Project, DATAATADATA: Everything and Nothing at The Invisible Dog Art Center and DATAATADATA:3-Sphere at ODETTA.

Dr. Timothy Goldberg is an Associate Professor of Mathematics in the Donald and Helen Schort School of Mathematics and Computing Sciences at Lenoir–Rhyne University in Hickory, North Carolina. His mathematical interests are primarily in geometry.

Rachael Elliott is a versatile performer who is active in classical, new music, and improvised rock and pop. She is best known as the founding member of the genre-bending music group, Clogs. Ms. Elliott may also be heard on recordings by The National, My Brightest Diamond, and Thomas L. Read, and in films including Turn the River and Colony.