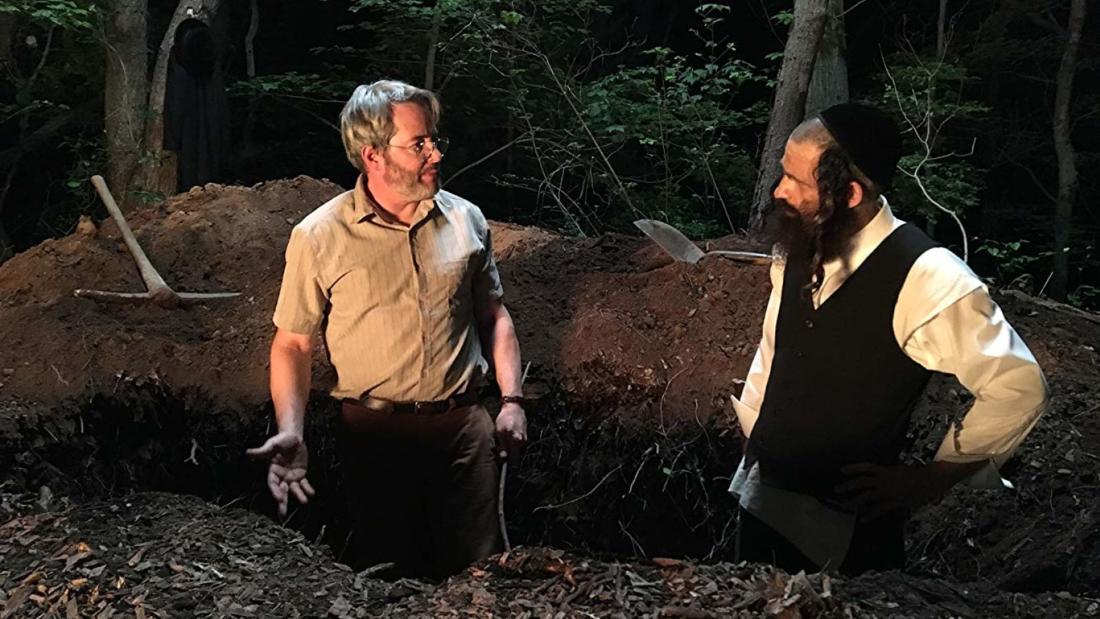 Director of TO DUST

To Dust— Death and the necrobiome

Introduced by producer Emily Mortimer, this preview screening will be followed by a conversation about life after death from a microbial perspective with microbiologist Maria Gloria Dominguez-Bello, director Shawn Snyder, and star Géza Röhrig.

A mourning Hasidic widower enlists a reluctant biology professor in his obsessive quest to understand what exactly will happen to his young wife's body as it returns to dust.

Shmuel, a Hasidic cantor in Upstate New York, is distraught by the untimely death of his wife, Rivkah. As he struggles to find solace in his religion, which proffers a stringent timeline for grief, Shmuel grows increasingly haunted by visions of Rivkah’s decomposing corpse. Convinced that her soul will suffer until her body returns to dust, Shmuel decides that to stop his feverish spiral he must seek an understanding of the physical processes of her decay, despite the blasphemy inherent in any scientific inquiry. Risking discovery and expulsion, Shmuel tip-toes outside his enclave, where his search leads to Albert, a bumbling biology professor at the local community college. Soon, Albert is unwittingly seduced into an odd world of homespun forensic research and begins to guide Shmuel through outrageous experiments that aim to approximate a timeline for Rivkah’s dissolution—starting with the theft, suffocation, and burial of a pig. As amateur scientists and incompetent criminals on progressively absurd outings, the two find themselves neck-deep in genres in which neither of them belongs. With their macabre moonlit misadventures growing ever more perilous, the odd couple will stop at nothing to satiate their curiosity and find Shmuel the comfort he desperately seeks.

Maria Gloria Dominguez-Bello is a professor of microbiome and health at Rutgers. Her research focuses on the development of the human microbiome and its functions, as well as the co-evolution of microbiota and host. Dr. Dominguez-Bello is leading a team of scientists from multiple universities that propose creating a global vault to collect and preserve microbes. She has authored over 100 scientific publications, is a member of the American Academy of Microbiology, winner of the Roi Baudouin Award given by the International Foundation for Science, and of the Medal of Merit given by the Venezuelan Institute of Scientific Research.

Géza Röhrig is a Hungarian actor best known for starring in the 2015 film Son of Saul, which won the Grand Prix in Cannes, the Golden Globe for Best Foreign Film, and the Academy Award for the Best Foreign Language Film. Röhrig has two films in post-production: The Chaperone—written by Julian Fellowes (Downton Abbey) about a caretaker for a young Louise Brooks—and Undergods—a science fiction film by Chino Moya. In his spare time, Röhrig has volunteered for the Jewish burial society.

Shawn Snyder is a writer and director. He was named one of Filmmaker Magazine's "25 New Faces of Independent Film” in 2016. To Dust, which won the Audience Award when it premiered at the 2018 Tribeca Film Festival, is his debut feature. At Tribeca, Snyder also received the award for Best New Narrative Director. The film has been supported by IFP's Emerging Storytellers program, NYU’s Alfred P. Sloan First Feature Award, the Tribeca Film Institute’s Sloan Student Grand Jury Prize, and it was selected for the inaugural slate of projects supported the NYU Production Lab. Snyder is a former IFP/Marcie Bloom Fellow, a Sundance Institute Feature Film Fellow, and a graduate of NYU’s Graduate Film Program.